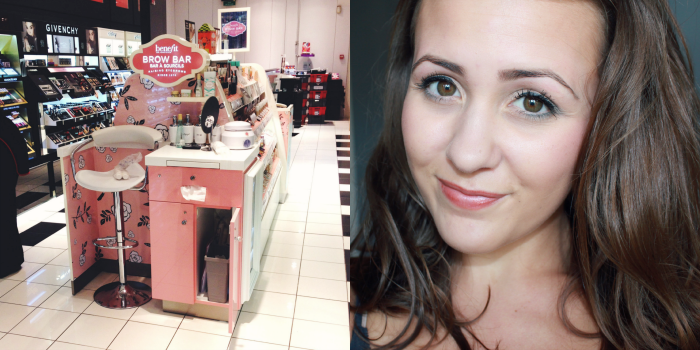 Hi loves! As some of you may have seen on my social media, I got my eyebrows done!! It was the first time I ever got them done by anyone else but myself and I’m super pleased with the result! I went to a Brow Bar by Benefit to get them done. You can find Brow Bars at select Benefit counters and you do have to make an appointment. I didn’t know about the appointment part but luckily for me, she still had a free spot that day. The girl that did my brows was super friendly and she explained everything very nicely. I decided to get my brows colored and waxed, which costs €35. Of course, I had a coupon for 20% off my entire purchase (simply subscribe to sephora.fr ‘s newsletter and you’ll receive them as well) which also worked for my brows, so I ended up paying €28. At first, I wasn’t planning on getting them colored but since my eyebrows aren’t the most voluminous ever, she convinced me it would look a lot better if I colored them, which it really did.

My eyebrows weren’t even to begin with, that’s why coloring really helped. She started off by applying a coloring paste on my eyebrows, which at first looked super scary! After a few minutes she removed the paste and I could already notice a huge difference. Then she started waxing my brows. It wakens you up to say the least!! That freaking hurts! My skin was all red around my brows. After all that, plugged a few extra hairs and trimmed them. She also applied doe concealer on the red spots around my brows and filled in my brows using some sort of brow powder by Benefit.

I was hesitating for such a long time wether or not I should get them done but I am so so so happy I did! My brows have never looked better. They’re even, they look fuller and for once, they have a shape. If you’re also hesitating, don’t! Just make an appointment and get them done because I’m sure you won’t regret that decision one bit 🙂

Hi, I'm Eline and welcome to my blog! I'm a 25 years old blogger, vlogger & business owner with a huge passion for the beauty and fashion industry. Elineblaise.com is my way of sharing this passion with my readers. I sincerely hope my blog & channel can be your go-to source for everything beauty & fashion related!